We left Boulder, Colorado mid-afternoon to reach Cheyenne by dinner. We wanted something local, of course, and a waitress at another more upscale, but booked restaurant, mentioned Sanford’s Grub and Pub – which proved a fine call. Simple food and a fun atmosphere just off the main drag. Pub and nostalgia theme with a slight touch of county fair…and easier on the pocketbook to boot (to pun a Wyoming theme).

Now, we had not travelled I-80 before and hadn’t realized the differences compared to I-70 through the Rockies to the south. By map we had routed the shortest diagonal from Tennessee to Washington state. We had thought to camp somewhere outside Cheyenne, but it was now past dinner time and we soon found that campgrounds were few and far between.

National forests? An illusion, unless we aimed to travel south off the interstate. Just mile after bleak mile of arid (and totally unexpected) flat landscape – with an occasional industrial facility to remind of hidden earth-wealth to be gleaned.  Later we found out why – the Red Desert and the Great Divide Basin.

A bit of research promised areas of natural desert beauty, fossils, rocks, sand dunes and animal life. Little of this was to be seen from the highway, and our quick-through timetable made such exploration impossible, but we promised ourselves another visit when we had time to ramble. Meanwhile, we needed a place to camp.

That finally resolved itself into an RV park sometime around 9:00 in Rawlins, Wyoming – a small town of some 9000 residents of which we saw little in the deepening twilight. And as we were still tent-camping, we had our setting up routine to do in the midst of all the motorhomes and assorted comfort rigs. But the park had a small strip of grass for apparently rare folks like us and so we eventually bedded down for the night.

(Interesting fact – Later, we learned that “Rawlins Red” was an iron oxide pigment mined nearby and that paint containing this particular hematite had anti-rust properties, and is thought to have been used as the original paint on the Brooklyn Bridge.)

The next morning the scenery gradually changed as we drove from Rawlins to Rock Springs, becoming increasingly hilly and beautiful. I wondered at the thoughts of those crossing this expanse on horseback and wagon so many years ago, without the comfort with which we so easily ate up the miles. 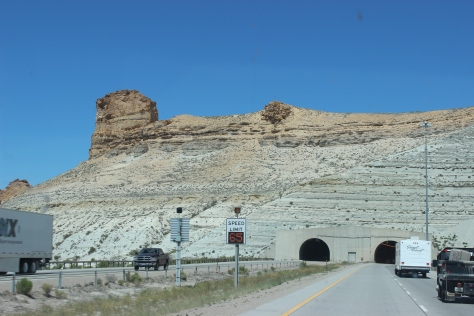 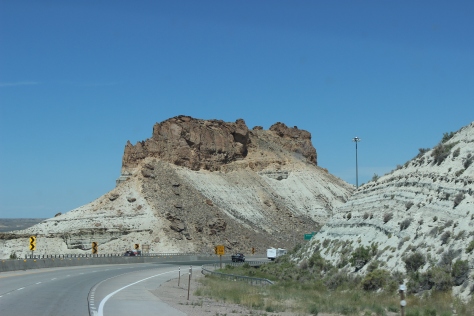 Rock Springs was a minor miracle of oasis, a green strip along bluffs that was the first town of any size since leaving Cheyenne. Again, no time to stay and explore this interesting micropolitan area of 40,000, but onwards towards Salt Lake City.

Our earlier plans had called for staying an evening at Antelope Island State Park (despite mosquitos), but it was only mid-day so we settled for glimpses from the highway as we decided to push on. Another visit for another day.

We continued north on I-15 and joined I-84, where it was a day of steady driving.

That evening we camped in one of the prettiest spots on our way out, Three Islands Crossing State Park. Sited along the Snake River at Glenns Ferry, it was clean, well-maintained, quiet and a small Idaho jewel. The Oregon Trail History and Education Center, a 10,000 sq. ft. interpretative center, is there and we learned that this crossing was one of the most famous spots along the Trail as it was  where emigrants had to decided to either cross the river or continue onward along the more difficult south side.

Next up, the Canadian border and finally, Vancouver…